Going Along To Get Along.

"My working assumption has been that the only thing that Barack Obama believes in is Barack Obama. With that thought in mind, I'm seldom surprised by anything he's done. For leaders, particularly the kind who should be written of in quotation marks ("leaders"), it's often easier to just go along with what seems to be conventional wisdom in a bureaucracy, and end up losing a fight. When you don't believe in anything, there aren't really going to be many reasons to avoid going along."

As true as this may be, it really begs the question "why bother contesting for a leadership position if you are not going to lead?" From Poppy Bush onwards we have been inflicted with empty suits that captured the Executive as resume padding.  It has been all about blind ambition linked to ego gratification; with no real desire to do the heavy lifting the job required. You can see the downward spiral from Pappy Bush, to Bill Clinton, to Shrub and, finally, to Obama.

I wish I was a systems engineer, or someone who could discern how systems work. I do not have the mental discipline or the framework to achieve that kind of analysis. I just know that our system of government, especially it's political process is fundamentally flawed. I keep looking at the results of the the process and keep being amazed on how badly it fails at delivering a more perfect union. We are 0 for 3 since Regan as far as leaders go. And let's be blunt, while Reagan was a great leader, where he lead us was truly awful place. The triumph of Goldwater reactionary conservatism has been a disaster for the nation.

There is something very wrong with the rigged political system we operate under. The will of the People, what they voted for, was transformational change. The Democrats and then the nation went way outside the box and voted for something new under the sun; or something at least seen as new. What they got was yet another clueless pol, interested only in his own aggrandizement.

I look at Obama and just wonder. Here is a man who has been angling for the Presidency since Harvard Law. Every move he made since then was made in that effort. He kept his nose clean, and carefully avoided leaving any fingerprints.  And to what end? To sooth his outsized ego? To attain some kind of personal validation?

But more importantly, why is a man like Obama being so richly rewarded? Why do we keep accepting these empty suites to "lead" us? Why are our political elites so feckless, so underwhelming? Does the system have to break as badly as it did in the 1930's for a change to occur? I dread that possibility. Our nation came a lot closer to totalitarianism than was comfortable in then1930's. We got really lucky with FDR, who was able to save Capitalism from itself. This time, we were not so lucky, we got Obama.

And it does not look much better going further, as our choices look like Mitt and Barack for the top job. Neither of these feckless political chameleons can be described as a "leader."   Mittens is Barry's doppelganger, a big pander bear with no core to speak of. Again there is something fundamental wrong with a system that delivers the "choice" of Mittens or Barry.

I no longer see any cure within the system for what ails it. My thin reed of hope lies with the Occupy movement and its very smart decision to stay far away from the siren song of our political duopoly. The worst thing the Occupy movement could do is become an arm of the Democratic Party. As long as Obama holds the Oval Office the Donkeys are irredeemable. Even after Obama leaves, the Progressive base has to undergo a total rebuild. Obama's tenure has been an absolute disaster for the Progressive base. The supposed high minded and principled base has degraded itself to fan politics and the cult of personality during Obama's term in  office. The Progressives have cheer-lead Obama's continuation of Bush policies; policies that the Progressives would have absolutely opposed if those same policies were attached to a President McCain. It seems that hypocrisy has a bipartisan appeal as both TEA Party and Progressives are more than willing to soak in it.

Fortunately Occupy is not a "progressive" movement, or maybe it is the only real progressive game in town. Either way, Occupy is the first grass roots movement for systemic change I have seen since the heyday of the 1970's liberation movements. Interestingly Occupy does not claim any leaders but depends solely on participatory democracy to set its agenda. That is smart move, seeing as the leadership class we have is so underwhelming.
Posted by Unknown at 6:43 AM

For what it's worth, I finally came up with a response. 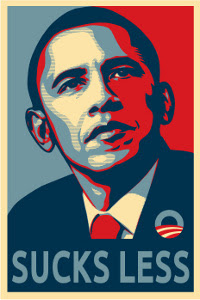 The Dust Bin Of History